Sleep 201 : Fighting the Real Enemy, and the No.1 mistake parents make when it comes to bedtime fear 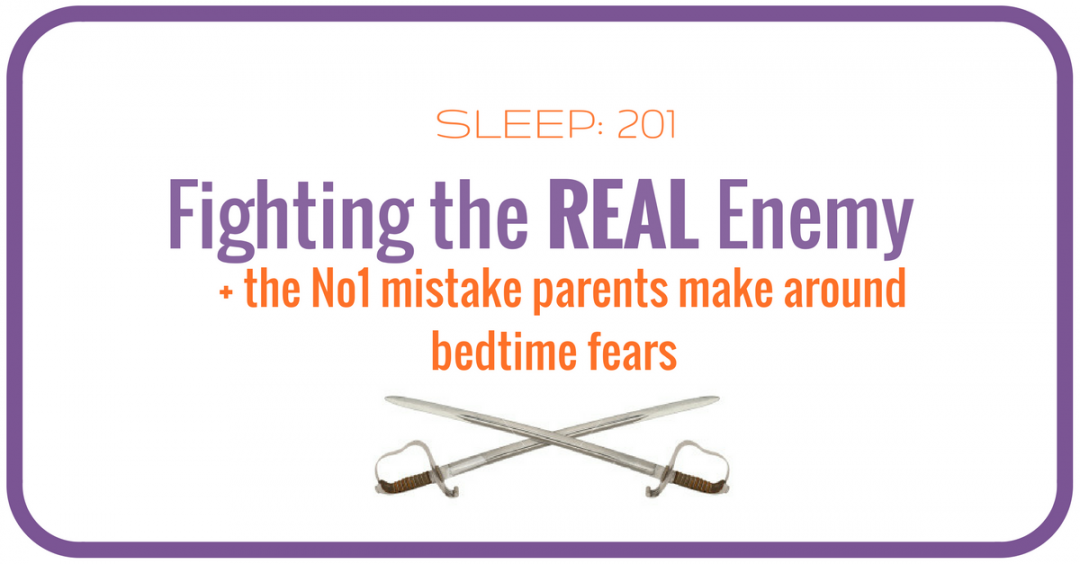 Many, many children go through a stage in their development when they don’t like going to bed, and the reasons can be many and varied.
Parents often tell me their children are generally fine and ‘the behaviour’ only begins when it is time to start the bedtime routine.
One dad I spoke to described in detail the battle that ensued between him and his daughter. Her delaying tactics were many and varied (and quite standard repertoire); refusing to go up the stairs; refusing to get into bed; distraction techniques; food requests; drink requests and refusing to sleep without the light on.
He was annoyed that it was such a palava and cross that she wouldn’t just do what she was told and go to bed/sleep.
I have had this same conversation many times with mums too, over the years.

When I asked him why his daughter didn’t like going to bed, he looked at me blankly.
It was a question he didn’t have the answer to.
He had never stopped to find out.

Like so many parents, he was getting sucked into the ‘bed-time-battle’, thinking that this un-cooperative child was the foe to be avenged, for the prize of a quiet evening and some child-free time.
This picture is so common it is scary.
Scary? Because it means there are so many children resisting going to bed for reasons only they know. If no one else knows then they are not being understood and not being helped emotionally or practically, they are alone with the thing that is the REAL enemy. Their real challenge.

Solutions and sleep come quicker when parents and children join forces and work together.
I’m sure you have noticed, but the middle of a battle of wills between an adult and child is never a good time to ask the child what they are scared of. If they know you are already wound up (and angry with them) then they will not feel safe to tell you the truth about their anxiety.

Much better progress can be made if this conversation happens at a time when both adult and child are calm and doing something else together and bedtime is not imminent.

Want to know exactly what to say and how to say it,
to get the breakthrough you both need?

CLICK THIS BOX and get your free version of the script I give to parents.

If you get to the point where your child actually tells you what is bothering them, then YOU MUST UNDERSTAND how brave they have been to tell you. At this point there is one MAJOR MISTAKE parents often make.

MISTAKE:  Tell the child there is nothing to be scared of.

Remember your child plucked up all their courage to risk telling you what scares them (if they had found it easy to tell you in the first place you wouldn’t have had weeks or months of bed time battle)  and now you are telling them they are wrong or stupid to be scared about that. This leaves children feeling wrong, stupid and still scared – as no one stopped being scared about something just by being told to not be scared.   What TO say and do is coming soon in another post. For now just make sure you STOP and LISTEN and really HEAR them and try to imagine what it might feel like for them to have had this fear they have carried on their own and getting lots of anger from you because they couldn’t handle it alone.
Communiction Cues to End Bed-Time Battles.  Get FREE download here