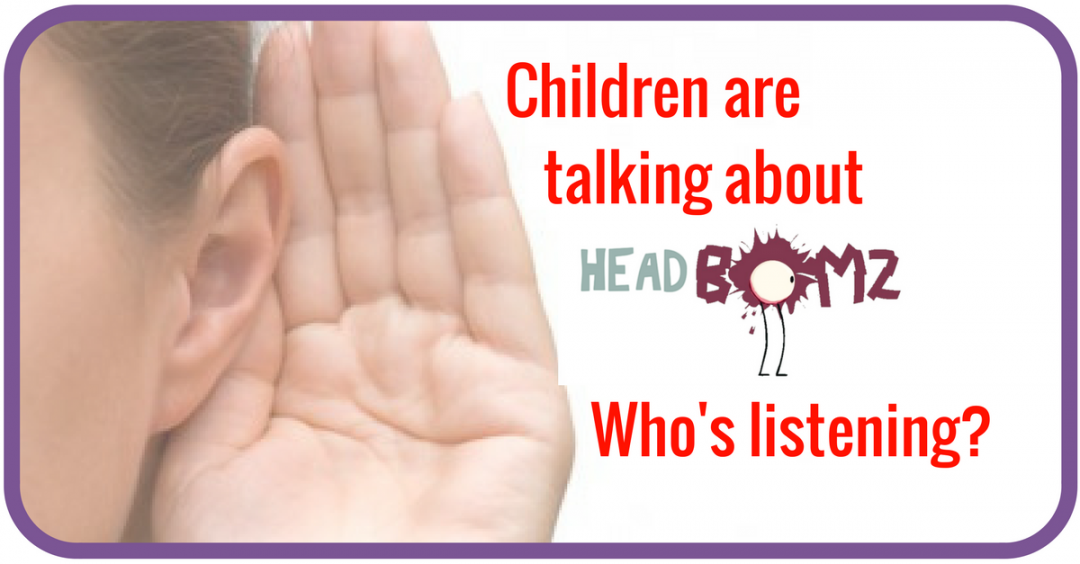 Dr Malie Coyne, is a Child Clinical Psychologist and a frequent voice speaking about children’s mental health issues in the Irish media. Even this morning she was on NewstalkFM with Dr Ciara Kelly speaking about how to help children after trauma. One of the things I heard her say really stood out:-

“From the top down, do we prioritise safety as much as we should?… There should be NO BIGGER priority than keeping our children safe, because they rely fully on us for protection. So for me it’s a no-brainer – we have to implement this from the top.”

If you want to listen to that interview again, then click here
So what does that mean in relation to the ISPCC CHildline HEADbomz campaign?
For me it boils down to 1 simple question.

ISPCC Childline has chosen to ask schools to use it with classes of the target age group 8-10. In addition they are choosing to have it played on mainstream media. It is shown frequently on TV, YouTube and in cinemas (UPDATE: just now withdrawn from cinemas).
Here are some of the things parents and teachers and CHILDREN THEMSELVES are saying.

It is everywhere, so EVERYONE has to see it

So I was hoping my daughter who is 5 wouldn’t see the HEADBomz ad but she has. She said to me today “I saw an ad that I really didn’t like”, I asked her to tell me what it was and initially she said she didn’t want to and then she said “heads explode in it”. When I asked her what she thought it was about she said “if you get way too many ideas in your head it will explode”.  She went on to say “it won’t really happen will it?”, “it really freaked me out” and “I don’t want to watch TV in case I see the ad”.
Parent

Even when a child is removed from the immediacy of watching the advert on TV or in the cinema, it can still be in their head, on their mind and bothering them. If this is the case they will be carrying around a body full of worry, anxiety and often be distracted and find it hard to concentrate. Some of the comments from parents whose children are having nightmares and not sleeping because of it are shown in a previous article. You can see them here.
Some teachers have been contacting me and are clearly already aware of the impact the video has been having on their children. Without showing the video in class, they have been able to handle things sensitively, following the guidelines for teachers I suggested here in my first article responding to HEADBomz.

“When we were talking about feelings today as part of stay safe today the children started to talk about the ad. I was struck by their sense of how grotesque the ad was and the humour. The intended message was not picked up by them. They are mostly 8 years.”
Teacher

Comments from children in 1st and 2nd class

N.B. These children were not shown the video in school – they brought it up in their SPHE lesson because they had seen it on TV/YouTube/cinema and they didn’t like it. Due to their comments and concerns from the staff this school decided NOT TO USE the material sent by ISPCC Childline as they didn’t want to cause further distress to their pupils. These comments were all expressed in their class discussion…

“It might help a child because they might feel better – No it will scare them make them even and make them even less confident to tell about​ their feelings – I don’t think it would help other children because in the background it says ‘ha ha that’s your head gone’.
At the start his eye blows up and goes into the fish bowl and the fish eats it. It’s inappropriate. – It makes you feel like your head will turn into a bomb – The younger kids might think that will happen to their heads – If they watch it they might get upset and might get more angry. – When they see the ad they might get worried and think their head is going to explode. – Younger children might think it’s scary and get nightmares – At the end of the ad the boy talks about his feelings and his head looks like it’s going to explode but it shrinks. This should be at the start. – I don’t want to eat my lunch right now because thinking about the eyeball freaks me out.
Children in Class 1-2

Giving a group of children the chance to say what they really thought about the video in an anonymous poll, is a great way to reduce the peer pressure involved – again, without showing the video, one teacher sent me her class results:

4 children said they weren’t sure either way –

24 children said they didn’t think it would help

Some children really struggle to talk about things they have seen or heard that bother them. So often it is easier for them to draw or paint what is on their mind and then talk about it if they want to. This is exactly what another little girl did. This message came from the family member looking after her for the weekend.

I was looking after an 8yr old for the weekend. She went to see a kids film with another relation. When she returned from the film, she appeared pensive and pre-occupied.  She started to draw some pictures and then asked me if ‘headbombs’ were real and could that ‘happen to her “like it says in the ad – ‘it could happen to you”.  She was also complaining of a headache.

If you know of other children, whether they are sensitive, struggle with worry or anxiety, OCD, ptsd, are autistic or for any other reason they struggle with the HEADBomz ad then please feel free to let their voice be heard. You can use the comments below, or send me a private message here.

I am so sad this is happening –

– and is still happening 3 weeks on from when many parents and children’s therapists and counsellors started asking ISPCC Childline to reconsider and withdraw their ad. In a world where so much happens that we cannot prevent, this seems to be something we should be able to stop. I know there are many compassionate, empathetic adults who have shed tears over the pain being caused, and potential damage being done to this group of children from the ad. Others are rightly angry.

You can click here to read the opinions of many professionals who are already asking for it to be withdrawn.
If you want to join those speaking out, speaking up for these precious children whose voices don’t seem to be being heard yet, then please comment below or contact me.
As professionals predicted, parents are sharing the proof that there are many children who are being harmed by HEADBomz.

That, I believe, is no longer the question. The new and very pressing question is:-

WHO will protect them?