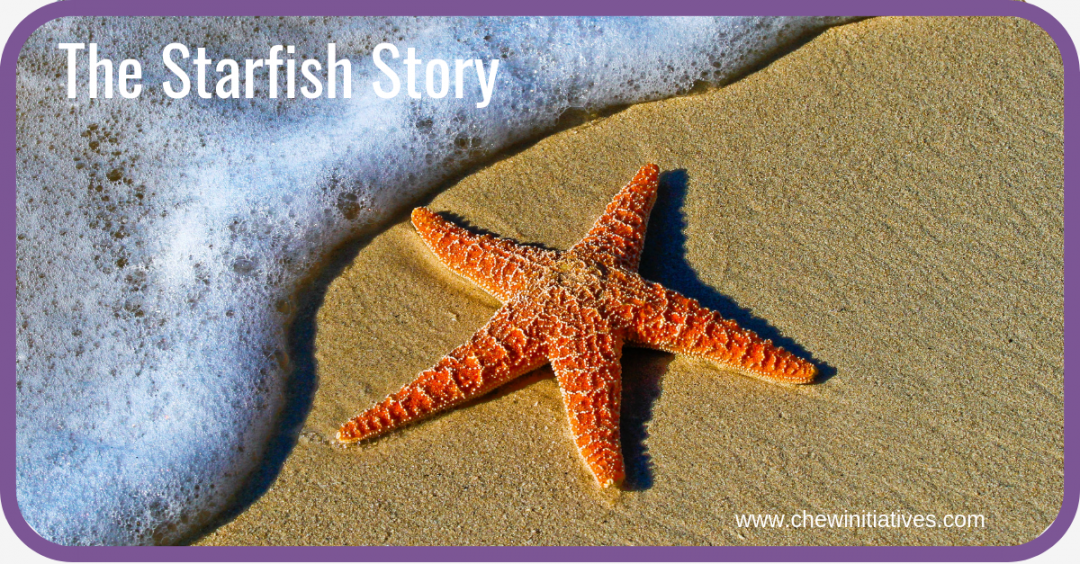 I know this story is well known. I’m sure you have heard it before. This is my version of it. It ‘s good to come back to and remember it’s message now and again. We may not be in a position to change the world for all children, but we can certainly make a difference…

One day a man was taking his dog for a walk to the beach. It was early in the morning – a great time of day for a walk, especially with a dog.

As the man got to the top of the cliff he could see the debris from the storm that had rampaged against the shore all night long. The beach was covered in all sorts of things: seaweed, drift wood, rubbish… and starfish.

There were hundreds and hundreds of starfish that had been carried up onto the beach by the waves. Now the tide had gone back out, the waves had abandoned their cargo and if these starfish didn’t get back into the water – well…

Everyone knows that starfish need water.
Water is the environment that they can thrive in.

The man got down the steep path with his dog, and onto the beach. And he could see now that he wasn’t alone. There was someone else on the beach early this morning too.

It was a boy and he was throwing things into the sea.

The man got near to the boy as he was going in that direction anyway… and as he approached he could see that it wasn’t pebbles or wood the boy was throwing in, but starfish!

The man shook his head and carried on walking. The beach was covered in the tiny creatures. What could anybody do to save them? It was ridiculous to try. “Ridiculous…” he muttered to himself and on he went.

When he had got as far as the big rock – the only thing it seemed the sea hadn’t moved in last nights’ storm, he turned, called his dog and started heading back up the beach towards home.

He was amazed to see that, after all this time (he walked slowly, did the man) the boy was still there. Still patiently and carefully picking starfish up one at a time and throwing them back in to the waves.

The man started muttering and mumbling to himself again… but his dog went bounding up to the boy, wagging his tail and curious to see what was in his hand.

The man, who was obviously older and knew a thing or two about life, couldn’t help himself. He told the boy he was being ridiculous. That he should stop what he was doing right now and go back home. There were too many starfish up on the beach… and he was just a boy. The man finished his ‘advice’ with the simple, emphatic statement: “There are too many of them. There is nothing you can do to make a difference.”

The boy stopped still for just a moment. Was he deciding to listen to the man? Was he contemplating the truth of what the man was saying? Or was he trying to figure out something else.

Now it was the man’s turn to be quiet. He watched the boy for a few moments, his dog hovering by his side wondering what would happen next… and if it was home-time still. Then the man bent down. His eye fell on a beautiful starfish that had slightly different colouring to the others. He gently picked it up, walked it to the water’s edge and released it quietly, whispering “made a difference to that one…”