SLEEP 401: What Parents need to Understand about Sleep after Trauma ~ The time I advised a parent not to take their child to the doctor. 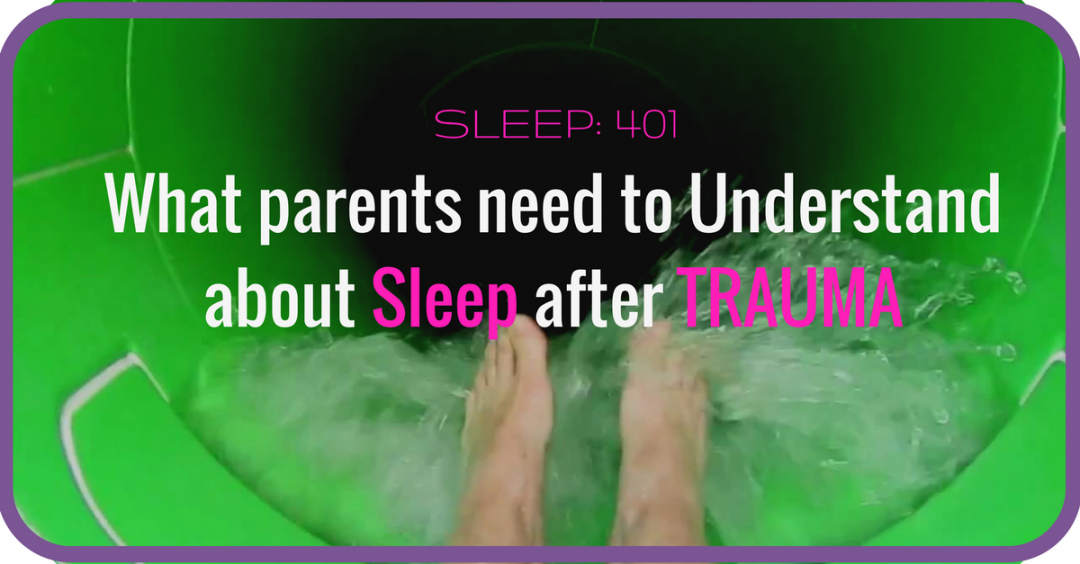 Children not sleeping well is an issue. It is an issue for them and often quickly becomes an issue for others in the family home too – especially if the ‘sleep challenge’ is seeming to be an ongoing issue rather than just a blip.
Many of the children who I have worked with struggled with sleep. Some of them REALLY struggled with it, to the point of long-term not sleeping for more than an hour or two at a time for weeks or months on end.
When one Dad brought his daughter for her third play therapy session, he announced to me he wanted to take her to the doctors. She was not sleeping and she needed some tablets and could I ‘have a word’. As I never speak about important things with parents in front of their children, I waited until we were safely in my play therapy room and well into the session before mentioning it to her.

Sleep means being out of control.

Many, many children (and adults) who have experienced trauma in their life (particularly those who have experienced physical, sexual or emotional abuse) often find that they have nightmares that feel extra horrible. They are a way of the subconscious brain ‘re-experiencing‘ the trauma in order to process it in the hope of making sense of it. The moment(s) of trauma was very likely a moment when the child was totally out of control (dis-empowered) and sleep is now another traumatic experience for them when they feel out of control, and something bad (nightmares) happens.
Going to the doctor for not sleeping, would put a child in a room with 2 adults and depending on the particular doctor, this is often an overwhelming and dis-empowering experience in itself. If the child was given sleeping tablets, then they now have drugs to dis-empower them again and make them sleep, the very thing the child is trying to avoid.

I spoke to the Dad on the phone and made these 3 suggestions:-

As our therapeutic relationship developed, and when she was ready, over time she was able to reprocess her traumatic experiences. The theme and subject of the nightmares were played out in her sessions and resolved. And with continued guidance on how best to parent her through the process (particularly around bed time) her sleeping got better too.

I totally understand that parents (who often become sleep deprived themselves when a child is persistently not sleeping), just want a quick fix, and if the child is keen to go to sleep then maybe a trip to the doctors might help for a time (although don’t go until you have already properly tried the suggestions in the other Sleep Series articles – listed below in case you missed them!). HOWEVER, if your child is not wanting sleep, and rejecting any real help to get to sleep, it may well be because of trauma-related nightmares.

If so, what they need is understanding, empowerment and the chance to heal at their own pace.

If you want to get on the list of people to be notified when we run trainings for parents sign up here.
The other posts in the SLEEP SERIES are here:-
Sleep 101 – 3 Essential Foundations for a Better Bedtime
Sleep 201 – Fighting the REAL ENEMY + the number 1 mistake parents make around bedtime fears
Sleep 301 – Beyond the Bogeyman ~ Empowering children to overcome bedroom fears